With the support of my jointfamily in India, I continued my work, creating and nurturing a bond between Kolkata and Japan.

Kazuko Nigam (left) with her husband, son and daughter. At that time, she wore saree every day = 1984

Interested in working abroad, but there seem to be many hurdles such as language, environment and security. How to overcome them? What is the real pleasure of working abroad? What are the prospects? Let's have our predecessors, who have been actively working in Asian countries, teach us the reality.

Kazuko Nigam has been teaching Japanese in India for 46 years

Eastern India’s Kolkata, as a base during the British colonial era, was one of the world's largest megacities. It is a particularly crowded city of India, with a population of 1.3 billion. In such a city, there is a woman who has lived for nearly half a century and has been able to connect Japan and India.

Kazuko Nigam (72), after marrying her Indian husband in 1972, moved to Kolkata and has been teaching Japanese to Indians since 1974. "Be sure to write a sentence using the words that appear in the text. Writing leads to memorization." She tries to develop the attitude of learning steadily and also Japanese culture and customs, other than language. She has also served as the principal of a supplementary school for Japanese children, which closed this spring.

Kolkata is the birthplace of Subhas Chandra Bose, the "hero" of India's independence, who fought the British in cooperation with the Japanese. That is why a pro-Japanese atmosphere remains. Unlike the political city of Delhi and the commercial city of Mumbai, it is said to be the center of culture such as literature and music. "Bengal is pro-Japanese. I have felt many people have the desire to meet and learn from Japanese people directly."

Initially, there were no teaching materials, so she made it herself. Now, some of her students can even read Yukio Mishima. In India, a culture that respects elderly and teachers exists and they lovingly call her "sensei, sensei". "I'm glad that the children of the students I had taught also come to study Japanese and even invite me to weddings. Watching my students walk on their own path of life is like seeing the growth of my own children.

I want people who have finished studying Japanese language, to continue to be involved with Japan. I want them to interact using Japanese. With that in mind, the Nihongo Kaiwa Kyookai Society(NKKS) was established in 1984. As a part of this volunteer activity, in 1996, students from both Japan and India started the "Japan-India Students’ Conference'', to deepen exchanges by visiting each others’ countries every year”. As the person in charge of the Indian side, she has acted as a bridge between the two countries.

Indian students are seen praying earnestly at a temple, thinking about religion and volunteering at Mother Teresa's Mother House. Japanese students tend to say that they want to see slums, paying attention to aspects such as poverty in India, but Indian students naturally have mixed feelings about their own country being seen in that way. However, some Indian students who were initially reluctant to go to slums, ended up choosing an NGO job after graduating because of their experience at the student conference, which they had never thought of before. Some of the participating students from Japan and India even got married. 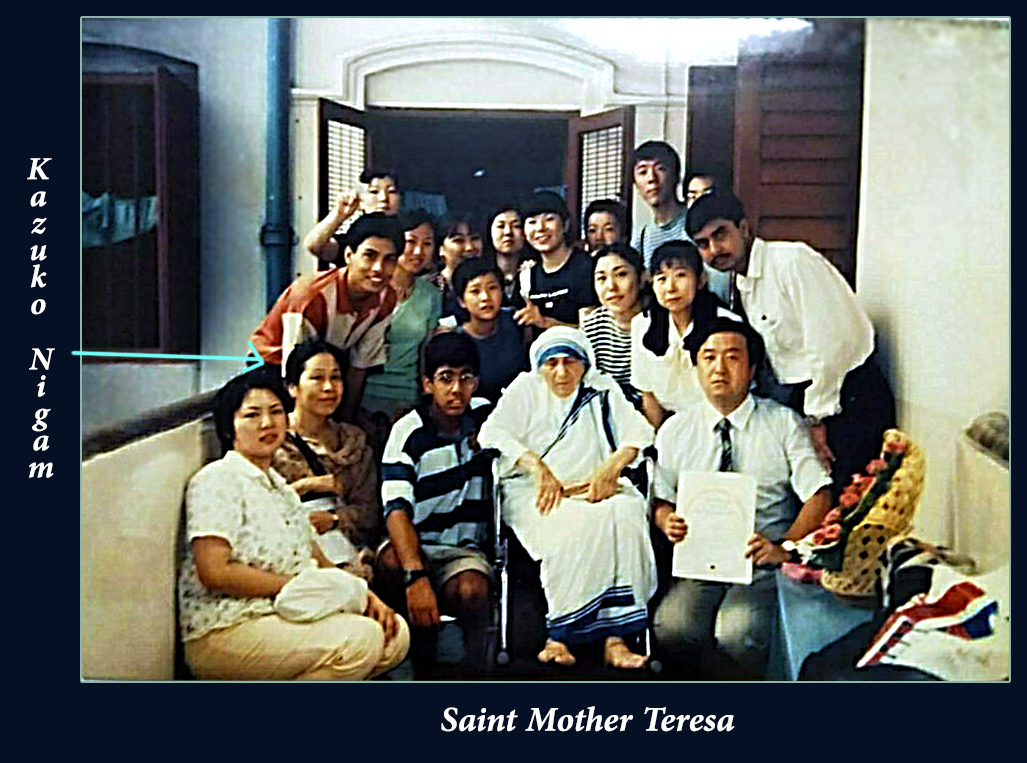 When students prepare to execute this Students’ conference, sometimes they face trouble. Misunderstandings due to cultural differences between the two countries tend to occur. However, "Sensei" trusts the students and never interferes.

Nigam says, "In Japan, you are taught to think about the other person rather than yourself. Japanese students plan toward their goals and value the process. But Indian students are centred on self. Own opinion is said very clearly and hence It becomes very difficult to put things together. Even if one makes a plan, things do not proceed according to that, resulting in last minute action. From the perspective of Japan, the Indian way may be haphazard. However, when something happens, Japanese students feel in trouble but Indian students seem smart and are able to put things together. Thus, there is scope to learn from each other."

As her father worked for an insurance company, Nigam grew up in Himeji, Tottori, Kyoto, Hakodate and Matsuyama. When she was in her second year of high school living in Hakodate, her father was transferred to Matsuyama, and she lived as a boarding student. Then she entered Matsuyama Junior College following her father, but later moved to Osaka. "I was used to moving, so I never felt lonely. Rather, I was happy to be able to travel to various places."

She got the qualification of a dietician at a junior college and joined a job at the Kansai Training Center of the former "Association for Overseas Technical Scholarship (AOTS)" that accepted overseas engineer trainees. They prepared morning, lunch, and evening meals for foreigners learning Japanese and technology. She learnt that there are vegetarians and some people in the world can't eat pork. She had never been abroad.

She decided to get married to Ravi Kumar Nigam (74), who came for technical training from India, because of his personality. International marriage was a rare thing, and her parents were surprised and thought for about a month, saying "I want you to think a little." For Nigam, when she thought of India, she could only think of curry. She thought all Indians even had a turban on their heads. At the end, her parents admitted, "It's okay as long as you are happy."

Immediately after getting married, they moved to India. The first time she saw Kolkata was as a city full of people. The year before 1972 when she came to India, there was the Third Indo-Pakistan War. It was a war in which East Pakistan (at that time), which borders West Bengal, where Kolkata is located, became independent as Bangladesh. Many refugees who escaped the war lay on the streets and stations of Kolkata. "When I saw the people sleeping in the daytime, I was afraid that they might have died. There were still few cars and cows were walking down the road. It was also a laid-back sight." she recalls.

It was natural for Indians to live in a joint family. Husband's grandmother and parents, uncles and siblings, and their wives. Her father-in-law ran a factory that makes bicycle parts. Her husband's grandfather said he went to Kobe by ship in the 1920s and tried to start a new business, and that he was also a Japanophile. The house had helpers and cooks living in. In Japan, she lived in a dormitory and didn't live with her family so much, so she felt a little cramped. "The whole family eating together means a lot of members. During the meal, the servant used to stand right behind me and watch me eating. He would bring a new one as soon as the chapati is finished, but that someone is standing and watching made me feel uncomfortable. I wanted to eat with my husband only."

However, the strength of the ties of a joint family helped her many times. A Japanese Bengali literary researcher, who was teaching Japanese in Kolkata, was to return to Japan and she was offered to replace him and teach Japanese. She was worried about whether to continue working after giving birth to a child. Her husband's mother encouraged her by saying, "Don't stop." It was a rare time for women to work outside, but her mother-in-law helped her care for her child. "There were two kitchens in my house, and if I wanted to eat the taboo-ed beef or pork, I could cook in the second kitchen. My mother-in-law was that much of a modern woman. She might have had the thinking that women should also be self-reliant. "

India is said to be a society where male-centered thinking still remains strong. However, she never had any unreasonable sightings or troubles because she was a woman. The year 1972 when Nigam came to India was the year when the "Working Welfare and Women's Law," which is the basis of the Equal Employment Opportunity Law for Men and Women, was promulgated in Japan. She thought the employer would give consideration to the health care of pregnant female workers, but it was completely insufficient in her eyes. "There was still a gender pay gap in Japan, but it was basically the same in India. Now, many of the active managers and politicians are women," she said. The Chief Minister of West Bengal is currently also a woman.

She never had a hard time deciding to go back to Japan. To put it bluntly, the food was curry every day, and there was no cooler in the hot and humid atmosphere of Kolkata, which was also called a steam bath. She had heat rashes all over her body.

Husband Ravi Kumar Nigam, Kazuko Nigam, Masayuki Taga, former Consul General of Japan in Kolkata, and daughterMayuri Nigam, at the party to commemorate the reception of the ORDER OF THE RISING SUN

The number of Japanese nationals living in India are increasing year by year. However, Kolkata is an exception. Companies that disliked the increase in refugees and frequent strikes moved to other cities such as Mumbai, and the economic ground subsidence progressed. In addition, India has a federal system with strong authority in each state. The fact that the Communist Party of India (Marxists) was in power in West Bengal, where Kolkata is located, from 1977 to 2011, also led to the drain-out of capital. There are few places to work, and local students go to other states and abroad. Japanese companies continued to relocate and withdraw, and the Japanese school closed in 1986. After that, Nigam served as the principal of the Japanese supplementary school of Kolkata, but that also closed in March this year

When the Japanese school closed in 1986, the children who were attending at that time buried a time capsule with their own letters near the school building. They promised to get together 25 years later and dig together. That promised year is next year. "The Japanese Association and the Chamber of Commerce is cooperating very much, but it would be difficult to get it done together due to Covid situation."

In November of last year, she received the Order of the Rising Sun, Gold and Silver Rays for deepening friendship and mutual understanding between Japan and India through the spread of Japanese culture and Japanese language. "I've been hoping to help someone. I don't know how long I can do it, but I have a circle of people to support me." She feels delighted to see the growth of people who are helping to connect India and Japan, where she lived.

We will update you with our newsletter & events of us